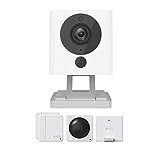 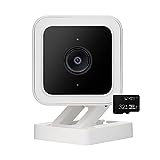 Wyze Labs Inc. is quietly establishing itself as the undisputed king of the market for low-cost, high-quality security cameras. Its Wyze Cam v2 is a solid, 1080p HD camera that costs $25 or less. Last October 27, 2020, they released its successor, the Wyze Cam v3. Both Wyze devices cost $19.99, plus a $5 shipping fee. However, Wyze Cam v3 includes new features and performance enhancements, and a clever new design.

If you own a Wyze Cam v2, you may be wondering whether you should upgrade to a Wyze Cam v3? We tested and compared these two cameras to see if an upgrade is a good move for you. And in this article, we’re going to dig deep into both of them.

The Wyze Cam V2 is built in a compact design, and its motion sensors are great for garage doors, bedrooms, bathrooms, or anywhere you want to put it at your home.

The Wyze Cam V3 is an indoor and outdoor video camera with night vision, two-way audio, and a 32GB microSDHC cards class 10.

Before we proceed to the crucial upgrades on the Wyze Cam v3, take a look first at these features that the v2 and v3 have in common:

It provides a free 14-day rolling cloud storage period. It records motion and sound events for 12 seconds, with a 5-minute cooldown period in between. The videos are securely uploaded to the Amazon Web Services (AWS) cloud using end-to-end encryption. Then, it is accessible for 14 days, and it does not require a subscription or monthly fees.

It allows you to look and listen for motions and sounds. When it detects motion or sounds, it sends a notification to your phone and starts recording.

It lets you monitor specific areas for motion only to receive notifications when they are relevant. You can set up detection zones for both Wyze devices through the app. So, if you have an area that frequently triggers the camera, such as a tree, flag, or bush, you can set up these detection zones to exclude that motion.

It can record and playback up to 3 days of continuous video using a 32 GB microSD card, sold separately. To replay videos, use your Wyze App. However, when the microSD card is full, the camera will overwrite the oldest files.

You can use beautiful time-lapse videos to record daily events. Set the start and end times and the frequency with which you want your camera to take photos. It also necessitates the purchase of a 32 GB microSD card, which is not included.

The advanced algorithm of the Wyze Cam cameras recognizes the distinct sound patterns of smoke alarms and carbon monoxide monitors. When either is detected, you have the option of receiving a notification directly to your phone so that you can act quickly.

The v3 supports Alexa, Google Assistant, and IFTTT (If This, Then That).

You can view the Wyze Cam’s live stream with your voice on any Alexa or Google Assistant device with a screen. In there, you can ask Alexa to “show me the living room” or “OK Google, show me my kids’ room.

Through downloading the IFTTT app, your Wyze Cam v3 can use applets—behavioral indicators that connect the v3 to other smart devices allowing it to operate based on events. If you don’t want to turn on your v3 every time you leave the house, you can use an applet to do it for you. When the v3 detects motion, you can select applets that activate smart lights.

The Wyze Cam v3 has the following crucial upgrades:

The mounting options for the Wyze Cam v3 have been improved. You can now mount it in three ways which are through the use of the simple magnetic mount, the secure screw mount, or the 14″ mount onto your existing mount, which are all fantastic features.

The addition of waterproofing is the most significant hardware change for the Wyze Cam v3. It now has an FCC, IC, UL, and IP65 weather resistance rating, which means you can use it outside without it getting damaged by the rain, unlike the Wyze Cam v2. It is suitable for use in temperatures ranging from -4 to +113 degrees Fahrenheit. And like the Wyze Cam v2, you can also use it indoors. Also, for its design, the Wyze Cam v2 has square-looking corners, while the Wyze Cam v3 has rounded corners.

Moreover, Wyze equipped the v3 with twice as many infrared LED lights, which improves night vision. The Wyze Cam v3 also has a dual IR light system. The near-IR lights for indoor have red dots, which are invisible to the human eye. The far-infrared light is for outdoor use, allowing you to illuminate a larger area and see more clearly.

Note: If you use your v3 version of the Wyze Cam outdoor, you’ll need a Wyze Outdoor Power Adapter, sold separately.

They also upgraded the night vision from black and white LEDs to a color CMOS starlight sensor, a valuable nighttime addition. Moreover, the v3 now has a lower F1.6 aperture than the v2’s F2.6 aperture. With that, it allows the Wyze Cam v3 to capture 40% more light than the v2. You can now see in up to 25 times darker environments and enables a new color night vision mode. However, if you prefer the regular black-and-white night vision, you can revert to it. (1)

The v3 camera supports simultaneous 2-way communication, unlike the v2 camera’s push-to-talk communication. All of this is useful because it allows you to communicate with someone outside your house without opening the door.

The camera includes a mini siren as a software feature. It rings at 80 decibels, and it will trigger when the camera spots or detects a person. Thanks to its improved speaker, the Wyze Cam v3 can now serve as a siren to warn you of unwanted visitors or intruders. You could use your Wyze app to control its siren.

Wyze also developed a Wyze Cam spotlight attachment for the v3, costing $10. Place the Wyze Cam spotlight on top of the camera, and it will activate and deactivate when your camera detects motion. Pre-orders for this accessory will be available soon.

Please note that the Wyze Cam v3 now lacks a USB port at the back. It is critical when you have the Wyze Sense, a small hub that plugs into the back of the v2 and controls all of the Wyze door and motion sensors.

With that, Wyze will launch a standalone hub in place of the USB port. This hub will still let you use your Wyze Sense devices, but it will no longer connect to the camera. This device will be available soon, according to the Wyze website.

Wyze also provides its Cam Plus cloud service, which costs $1.99 per camera per month and includes unlimited video storage with no cool-down period between recordings. Cam Plus also includes AI-powered person detection, and Wyze promises facial recognition and package, pet, and vehicle detection. Cam Plus is available for free for new Wyze Cam cameras for two weeks. (2)

Wyze Labs essentially redesigned what was already a high-quality product. They made improvements to make the Wyze Cam v3 feel like a significant upgrade over its predecessor, the Wyze Cam v2, while maintaining the compact design and low price.

The Wyze Cam v3 is clearly superior to the v2, but is it worth upgrading?

Upgrade to the Wyze Cam v3 if you:

Settle with the Wyze Cam v2 if you:

Note: If you don’t already own a Wyze Cam, you should get the Wyze Cam v3 because Wyze will phase out the Wyze Cam v2, and the v3 will be the only one available eventually.

You may want to check other product reviews and article guides we’ve written. Until our next review!