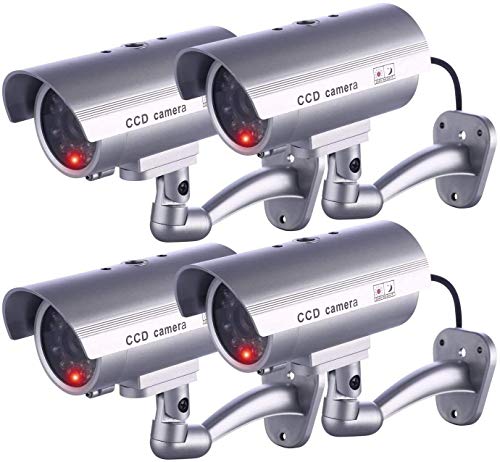 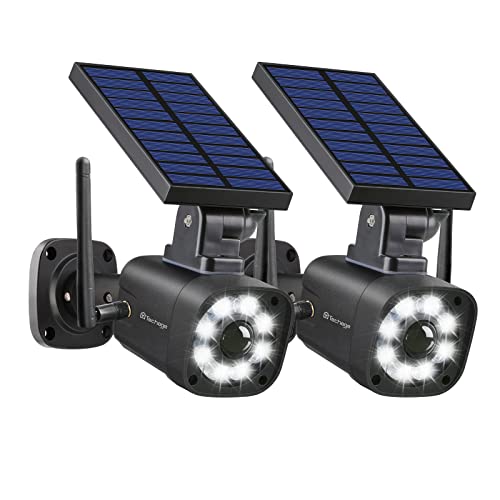 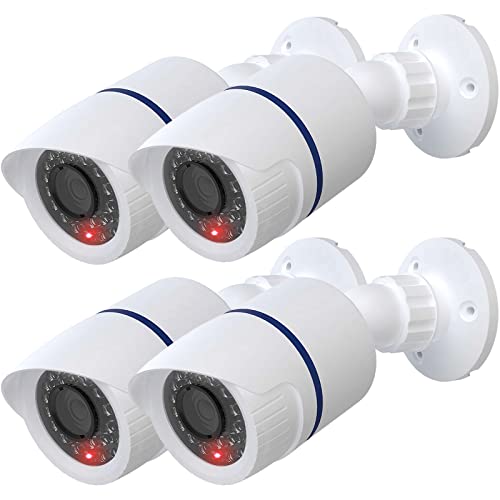 Fake cameras are an inexpensive, quick, and easy way to ward off intruders. I personally have some installed along with some real cameras to make intruders think they’ve come across an impenetrable fortress.

In my research and practical experience, I have found three fake cameras that are well made, look completely real, and even have extra features to ward off intruders.

Below I review my top 3 picks, and give some helpful advice everyone should know when considering fake security cameras. 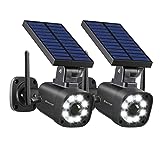 The Techage Solar Motion Sensor Light isn’t just a fake camera: it has a practical function. In fact, being a fake camera isn’t even the primary objective of this product.

The Techage L10 Solar Motion Sensor Light is a floodlight made to look like a security camera. The floodlight has a motion sensor in place of the fake camera lens, and the light turns on immediately when it’s triggered by motion.

This means that this light doesn’t need a switch. It turns on when you need it. It doesn’t just turn on for you, but for anyone passing by. However, for an intruder, the Techage Solar Motion Sensor Light is an intimidating warning sign.

This fake camera floodlight is also resistant to the elements. The Techage Solar Motion Sensor Light has a weather resistance rating of IP66, which is higher than most weatherproof cameras.

The IDAODAN Dummy Security Camera is an extremely durable and well-made fake camera. The camera even has a fake wire running out from behind, even though the camera runs on a battery.

The IDAODAN Dummy Security Camera has a fake infrared LED that ensures intruders see the camera even at night.

The fake camera comes with everything you need to install it. It also comes with security stickers in case an intruder doesn’t see the camera at first. 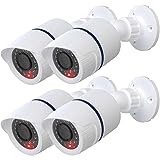 This dome-shaped camera is one of the easiest and fastest ways you can make your home more secure.

Unlike the entries so far, this camera is made to mount on the ceiling. The camera is extremely easy to install and comes with everything you need to mount it.

The short answer is yes. A lot less. Security cameras can cost a lot. Usually, you need at least a few security cameras just to cover the outside of your home. You also usually need either wiring or a hub for the cameras to connect to, which only adds to the cost. Even after you buy the cameras, most security cameras allow you to view live footage, but recorded footage is only to you if you pay a monthly premium. Even the highest quality fake cameras with extra features cost significantly less than the cheapest real cameras.

Why use fake cameras?

Fake cameras offer an inexpensive alternative to real cameras. Fake cameras are also incredibly easy to install compared to real cameras that require wiring and need to be connected to a hub. Many fake cameras even have fake lights and built-in alarms to ward off any unwanted intruders.

What to look for in a fake camera?

Most of what you’re paying for when you buy a fake camera is its body. Make sure the camera is made of good materials that don’t look fake. The body should also be resistant to corrosion and the elements. If your fake cameras have lights, make sure it also has an IP65 or weather resistance rating. (1)

The second thing you should look for is fake IR lights. Security cameras use infrared night vision to see in the dark. But some infrared LEDs also produce a dim red light when the camera is on. If your fake camera has fake infrared lights, it will easily ward off intruders even at night. Make sure these lights are very dim.

Also, get a fake camera that comes with a yard sign that draws attention to the camera and ward off any intruders.

No, fake cameras with lights use very little power and don’t need any wires. Most fake cameras use AA dry cell batteries that you can throw out and replace when they run out.

Can I pair fake cameras with real cameras?

Yes, absolutely. I would recommend having at least 1 real camera and placing fake cameras at different places around the house to intimidate anyone with malicious intentions. Remember to place those cameras strategically, so it looks like you’re trying to surveil different areas. (2)

How many fake cameras do I need?

It depends on the size of your house and the number of entries it has. But as a general rule, 4 is the golden number. Place the cameras at places where an intruder is certain to notice it. You don’t need to place any fake cameras indoors if you have enough outdoors; someone who didn’t care for cameras outdoors will not run away once they’re already inside.

Check out other products and learning guides below. Thank you for reading!

The cameras chosen here are priced appropriately for the features they offer. I would recommend the A-ZONE L10 Solar Motion Sensor Light, but there’s no wrong choice here.

Allow me to introduce myself. My name is John Fox and I’ve been working as a security consultant for over 20 years now. During my time in the industry, I’ve learned about what it takes to ensure your home and family are always safe. With Safe Now, I’ve tried to take those two decades of experience and share it with others. My goal now is to help others figure out how to make the right choices for their businesses and families. On my website, you’ll find tips and guides on how to prevent crimes, as well as product recommendations. What’s more, my readers can learn more about what to do in case of an emergency and how to protect themselves at all times. So, if you want to know everything there is about security systems and home safety, I invite you to join me and my team and help us build a community together.