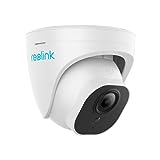 Reolink and Hikvision are two of the most popular security cameras brands in the industry. The two cameras have enough commonalities to use them interchangeably, yet, these cameras are different enough that you might be inclined to choose one over the other after reading the review. Overall, if you’re looking for a quick answer we think Hikvision is better for most applications.

Reolink is a smart security camera company rated for both indoor and outdoor use. It’s a wired camera that uses PoE to receive power and transmit data along the same cable.

Reolink has some of the highest specs and some of the best features that you will find in a security camera. We will go into all the specifications and features of both Reolink and Hikvision models once we’re done discussing what Hikvision offers in contrast.

Hikvision is not a retail brand like Reolink. Hikvision is an OEM that designs and manufactures cameras and sells them to other retail and installation companies. But since Hikvision does not have to spend money on branding or marketing, it costs considerably less than other cameras of its caliber.

One serious concern that we have with Hikvision is that it is a Chinese government partially owned company, and the government owns at least some stocks in the company. Ethical dilemmas aside, the law in china requires all companies based in China that do business abroad to send data back to the Chinese government. That being said, you should be suspicious of all security cameras regardless and protect your data with well-defined firewall rules.

Reolink and Hikvision have a lot of features in common. In this section, we’re going to compare the specs and common features of these cameras and announce the winner for each category.

Reolink has a 5-megapixel camera that records a stunningly high resolution of 2560 x 1920. The camera records 30 frames per second, allowing it to capture fast-moving objects.

The Hikvision IP camera has a 4-megapixel camera sensor that outputs footage with a resolution of 2688 × 1520. Hikvision also shoots 30 frames per second which makes it easy to even read the number plates of moving cars. (1)

But why would you need such a high resolution(2560 x 1920)? We’re glad you asked. You might not be able to view 5 MP resolution on a smartphone, but the primary purpose of high resolution is Digital Zoom. Photography cameras use lenses to zoom in on objects. This allows these cameras to enlarge distant objects without having to sacrifice any data. However, optical zoom requires the physical movement of lenses-you can’t zoom in the same way on recorded footage.

The only way you can enlarge an object in recorded footage is via digital zoom. But digital zoom does not create information out of the air; the footage has to have enough resolution to stay sharp. If you zoom in on 720p footage to see a number plate more clearly, the footage will get pixelated, and you won’t get any details out of it.

If you have a high-resolution camera, on the other hand, you can zoom in on the footage to see distant faces and read distant numbers plated without losing quality.

Power over Ethernet (PoE) has been a game-changer for IP cameras. Previously, security cameras needed different cables to be routed to them. One cable supplied power to the camera, whereas the other transferred data. This made having to install cameras and routing two different cables through walls for each of the cameras quite a complex and tiresome task.

However, PoE cameras only need one cable to be routed: the Ethernet cable. The cable is connected to the camera at one end and to a PoE switch at the other end. Depending on the model, a PoE switch can receive data from the end supply power to a number of IP cameras. However, PoE has a limited power budget of 17W which can be upgraded with a PoE+ switch to 34.2W. Also, not all IP cameras support PoE.

Both Reolink and Hikvision support PoE.

You might have noticed that even ten-minute videos captured from a phone take up a lot more space than even 3-hour HD movie video files do. The reason is different video encoding methods. (2)

When cameras capture footage, the resulting data is referred to as raw footage. Raw footage has a lot of uninteresting and repetitive data, which makes it quite large in size. In fact, raw footage of a given length and resolution is as large as a video file of that length and resolution can possibly be. This is because a raw file contains information about the exact RGB value of every pixel for every frame. Here’s how long security cameras keep their footage.

This way of storing data is clearly a waste. Hence, cameras have a built-in video processor that compresses the video and gets rid of all the repeated data.

H.264 and H.265 are two common encoding methods used in security cameras to compress video footage. Hikvision uses H.265 High-Efficiency Video Coding (HEVC), whereas Reolink uses H.264. H.265 is superior to H.264 as it is able to compress videos to a smaller size without losing any useful detail. However, H.265 requires a higher processing speed, which is why some cameras still use H.264.

But how does better compression help the user? Well, better-compressed video footage gets easily transferred through the Ethernet cable even if the cable is very long. Better compression also means that you will be able to store more footage locally in the same drive or microSD card.

Hikvision has H.265 HEVC that allows it to compress video footage better without losing any data.

Most modern security cameras are equipped with motion detectors, and Reolink and Hikvision are no different.

Motion detectors allow security cameras to detect any action in the surveillance area. These cameras send you a notification instantly when motion is detected. Engaging with the notification takes you to the camera app, where you can see live footage of whatever it was that triggered the camera.

Motion detectors also save you from having to go through hours of footage when you’re looking for a certain event. All the motion-triggered events are highlighted in the footage, and you can jump from event to event instead of watching hours’ worth of motionless footage.

However, motion detectors often detect false motion. For example, the movement of leaves may trigger the motion detector and you may get a notification even though nothing happened. To keep this from happening, cameras use different software features that minimize false motion triggers.

Both Reolink and Hikvision have motion detectors. However, only Hikvision has false motion trigger minimizing features.

Hikvision has superior features that minimize false alerts and allow the camera to only notify you when there is actually something happening in the surveillance area.

How about notifications that tell you who’s at your door? Hikvision has facial detection, which allows it to recognize faces (if the face has been registered into the camera) and notify you who’s at your door. This can give you some cool smart home features. For example, you can unlock your smart lock from your phone when the notification shows the name of someone whom you’re okay with entering your home. Or you can integrate the camera with your virtual assistant and set the assistant up to say greetings when a face is detected at your door.

Reolink has a built-in microphone that allows you to see as well as hear the footage. You can also set up the camera so that you get a notification when the camera detects sounds. This may not be useful outdoors, however.

Cameras have trouble capturing good footage when different portions of the surveillance area are lit up differently. Most cameras can either increase their exposure to focus on darker areas while leaving brighter areas overexposed or decrease their exposure focusing on brighter areas while leaving the darker areas underexposed.

Photography cameras (and even smartphone cameras) tackle this problem by using HDR technology. But because of the way HDR works, it can’t work for video footage.

However, Hikvision has a Wide Dynamic Range (WDR), which allows the camera to keep differently lit areas at the right exposure. This allows you to see all areas clearly, from the extremely bright ones to the extremely dark ones.

Reolink and Hikvision are both smart cameras and are compatible with most smart home devices. You can incorporate these cameras into your smart home to unlock a ton of other features. Hikvision is superior in terms of the features it provides. But if you don’t care for extra features, Reolink is the better choice since it has a higher resolution sensor with a microphone.

John Fox has been working as a security consultant for over 20 years. During his time in the industry, he’s learned about what it takes to ensure your home and family are always safe. With Safe Now, he’s tried to take those two decades of experience and share it with others. His goal now is to help others figure out how to make the right choices for their businesses and families.