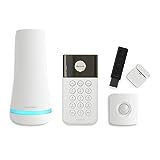 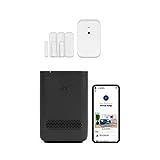 ADT is the oldest security company in the US, whereas Simplisafe is the new fancy kid on the campus. The two products have a lot of things in common, but the differences are what make it difficult to decide between the two. This article settles it once and for all.

I personally have used ADT for more than a year and have been using Simplisafe for about seven months. In this article, I will compare the features of the two systems face to face based on my experience. The rules are simple. The product that wins in more categories will be the overall winner of this Simplisafe vs ADT battle.

So without further ado, let’s get on with it.

Simplisafe is a DIY home security system that you can easily set up by yourself even if you’ve never installed a security system before. Once you buy the product, you don’t have to pay any monthly fees or sign any contracts to use it. Simplisafe offers most of its features without asking you for a premium subscription.

The system includes a base station that acts as a hub, a keypad to arm/disarm the system, 4 entry sensors, a motion sensor, and a panic button. You can also buy more entry sensors if you have more doors to ensure that no one simply walks into your Mordor.

Everything is wireless, and the system can be installed and set up in less than 30 minutes.

ADT requires you to sign a 3-year contract (2 years if you live in California). Although the up-front cost of the product is quite low, you have to pay monthly subscription fees. But you also get premium services with the subscription, such as professional monitoring.

Now we’re getting to the juicy part. Here, we’re going to compare the features that the two products have in common and announce a winner for each category.

These professionals investigate each trigger event to expedite security, and if an intruder is suspected, they dispatch to proper authorities immediately.

Both ADT and SimpliSafe offer professional monitoring. But the two systems cannot be any more different from each other in terms of this feature.

With ADT, the exact nature of the professional monitoring service depends on the options you choose. It’s going to depend on what services you need and how many sensors and cameras you need monitored.

How much you end up paying for the service is also going to vary based on these factors. ADT also has negotiable prices for all their services, so how much you pay also depends on your negotiation skills.

Simplisafe has two plans: the standard plan and the interactive plan. Both of these plans have 24/7 professional monitoring. Both plans also have a fixed price regardless of how many cameras and sensors you have.

With ADT, you have to sign a 3-year (2-year if you live in California) contract when you install the system. The contract also says that you’re only leasing the system and that you don’t actually own it. This means that if you move, you’ll have to leave the security system in your current house.

The contract also says that if you move to a different location within the period of the contract, you have to pay some amount to ADT or sign a new contract for your new home and start the cycle all over again.

Simplisafe does not require any such contracts. But, if you do choose to get one of the monthly plans, you have the option to cancel the plan at any time. The payments are monthly, and no long-term contract is required for the service.

Unlike ADT, you don’t need to sign any long-term contracts with Simplisafe, even if you choose to avail a subscription plan.

Both ADT and Simplisafe have phone support and email support options. You can also visit the websites and get support from their online help centers.

ADT offers 24/7 customer support, and ADT’s representatives are there to help you even in the middle of the night. ADT also has a live chat on their website, via which you can chat with a representative any time you want. The ADT website also has several video guides for common issues that people face on their website.

Simplisafe also offers live customer support, but only from 9 am to midnight. Simplisafe also has online forums where users can share their issues, and other users and representatives can offer their solutions. But this fails to match the support offered by ADT. (1)

ADT offers 24/7 call support, and live chat has video guides available for common issues. Simplisafe offers live support from 9 am to midnight, making ADT the winner in this category.

The mobile applications for both of these systems are really well-made and offer a smooth experience. (2)

Both of these apps seem to be loved by most users. I, too, find both of these apps pretty intuitive, especially when compared to other smart home security system apps. It didn’t take me long to figure out how to stream footage and how to use the system.

One feature that the Simplisafe app has and the ADT app doesn’t is self-monitoring. You can monitor your system yourself when you’re away and call authorities if you find something suspicious.

Both ADT and Simplisafe apps are pretty intuitive to use. But Simplisafe app also has a self-monitoring feature, making it the winner in this category.

The Simplisafe secret alarm feature allows you to set some entry sensors and motion detectors so that when those detectors are triggered, the system doesn’t let the intruder know. No alarm goes off, and instead, you get a notification. This feature is not ideal against intruders as you’d probably much rather they ran off because of the alarm than stayed in your house and got arrested, potentially damaging your property. However, this feature is pretty useful when you want to remotely servile a cupboard. You can hide a door sensor on a door, and you’ll immediately know when someone opens that door.

This feature is only available for the Simplisafe interactive plan. ADT doesn’t have any such feature.

Simplisafe is still a growing company. While they have launched a lot of products, their product range is not large when compared to ADT. ADT offers a complete spectrum of smart home devices. The ADT smart home system is also much more customizable than Simplisafe, and you have lots of options to choose from both in terms of the devices/sensors you want and the services you need.

Simplisafe is the clear winner here. It costs less, has transparent optional monthly subscription fees, and doesn’t require you to sign any contracts. Simplisafe is easily compatible with smart home devices and gives you complete control over the system. ADT may be a better option if you have very specific needs, but in general, I would recommend Simplisafe. I switched to Simplisafe about 7 months ago and did not regret it.

You may want to check below other learning and product guides that might help you in the future. Until our next review!