SANNACE is known for offering some of the most robust and feature-rich wireless camera systems at a much lower price than other cameras of similar specs. We bought and extensively tested some of the highest-rated SANNACE IP camera systems, and this article will go through our findings.

The SANNACE 8CH Wireless Camera System is SANNAC’s best-reviewed camera system, and we can assure you that it is one of the best cams we have reviewed.

The cameras are rated for both indoor and outdoor use and are equipped with 2-megapixel sensors that record footage in 1080p. These are wireless cameras, which means that they don’t need to be connected to a switch via Ethernet cable to transmit data. SANNACE 8 CH Wireless Cameras send recorded video footage via WiFi, which then is recorded on an included hard drive.

The Hard Drive that comes with the camera is 1TB, which allows these cameras to locally store a lot of 24/7 video footage. The cameras also have a high-speed video processor, which uses H.264+ video encoding to compress the video. Efficient video encoding guarantees that the camera is able to successfully and efficiently transmit all recorded footage via WiFi to the storage unit without losing any video quality. Efficient video compression also guarantees that the video footage does not take up a lot of space in the hard drive, allowing you to store a lot more footage locally before you have to delete older footage or replace the hard drive.

The camera also has motion detection and human detection. A lot of cameras that have motion detection are not completely accurate. They interpret even the movement of leaves as an important event and send you tons of irrelevant alerts and notifications even when nothing is going on in the surveillance area. SANNACE 8CH Cameras also have infrared night vision, which allows the cameras to work in the dark.

SANNACE 8 Channel IP Cameras have AI-powered smart motion detection that is able to differentiate humans from other moving objects and pets. The camera also has a light that turns on when an intruder is detected, letting them know that the area is being surveilled. This idea is quite innovative since the supplement light also prompts intruders to look at the camera and record their faces. The AI human detection system, along with supplement light, is quite efficient at deterring intruders.

The cameras are IP66 waterproof, protected from the elements, safe from UV rays, and can work in extremely cold in warm temperatures. This ensures that you get reliable all-year-round security without having to worry about the weather damaging or deteriorating the cameras, ever.

Unlike the previous entry, the SANNACE Wired CCTV Camera System does not support WiFi. This may not be a bad thing, however. A wired camera system that does not send footage through WiFi allows you more Privacy, and you don’t have to set up firewalls to ensure that hackers or the manufacturer can’t view your footage. Wired cameras are also able to transmit better higher quality footage so that WiFi and the data transmission intake are not limited by the proximity to the WiFi device.

The SANNACE Wired camera is also weatherproof, ensuring you get reliable surveillance all year round. Night vision on these cameras is quite impressive and gives you visibility of up to 100 feet with EXIR technology.

The cameras also have motion detection, which allows the camera system to send you alerts when motion is detected in the surveillance area. The motion detector also highlights motion-triggered events in the recorded footage, so you don’t have to go through hours of still footage when you’re looking for something. You can just jump from event to event till you get to the footage you were looking for.

The camera comes with a 1TB hard drive and H.264+ video encoding. This allows you to locally store a large amount of footage. The camera also has a special feature that allows you to mask certain areas from surveillance. You can place up to 4 black squares in the footage, and no data will be recorded for those areas.

The SANNACE Wireless 3MP camera records video footage in a high resolution of 2304 x 1296. This allows you to zoom in on objects without losing any picture quality. The camera also comes with a 5MP NVR, allowing you to view footage from multiple cameras at the same time on a screen with a resolution as high as 2K. The camera is also cased with metal, making it durable and not easy to damage.

The most impressive feature of the SANNACE Wireless camera is that the camera system works with Amazon Alexa. This means that you can incorporate the cameras into your smart home and make the cameras work with other smart home devices in your house.

The combination of AI human detection and Amazon Alexa compatibility can be really powerful. You can set the camera up with other smart devices in your house via Amazon Alexa and program Alexa to control other smart devices based on what the camera sees. For example, you can set up your smart home such that Alexa turns the lights on whenever someone approaches the front door. This smart home feature will offer a welcoming note to guests while would also ward off any intruders as a bonus.

The camera has a built-in microphone that allows you to hear whatever’s going on around the camera. It has excellent night vision enabled by powerful infrared LEDs that allow the camera to continue recording even in the dark. The camera can also be connected to multiple smart devices at the same time, allowing you to give multiple family members access to your camera.

The SANNACE Wireless 3MP Camera System does not come with a hard drive. But you can set up your own hard drive of up to 8TB of capacity. The cameras use H.254+ compression technology to significantly reduce the size of the footage without losing any quality. This allows the cameras to transmit data easily and store more footage in the same storage capacity.

What is H.264 Video Compression?

When cameras record video, it has a lot of repeated useless data that makes the video file quite large. This raw footage is not only difficult to transmit but also takes a lot of space on the drive. Hence, security cameras use video compression techniques such as H.254 codecs to get rid of all the repeated data before the video footage is transmitted and stored. This allows the cameras to store a lot more footage in the same space. H.254+ is better than H.254 at video compression and can be twice as efficient at compressing video without any losses.

Wireless Camera vs Wired Camera, Which Should You Buy?

Wired cameras, on the other hand, have the advantage of being able to transmit more data than wireless cameras. This results in footage that has higher resolution and higher framerate compared to wired cameras of the same video compression and camera resolution. If you have to route all the power cords of your wireless camera to a central location, you might as well get wired PoE cameras and get better video footage for the same installation difficulty.

How to Improve Night Vision on Security Cameras?

Poor night vision in security cameras is mostly caused by limited infrared light produced by the infrared bulbs in the camera. This is particularly the case for battery cameras since they can’t use much power on IR bulbs. You can improve night-vision on security cameras by installing a commercially available night vision infrared LED bulb. These bulbs produce infrared light, which is invisible to humans but visible to cameras with night vision. You may also use an infrared heat lamp, but that might be a bit too powerful for a camera and might not produce the wavelengths your camera is sensitive to. (2)

You may want to check other security cameras with great night vision features.

The amazing thing about these cameras is that they don’t need an internet connection to function, and hence you can be certain that your data is safe. You may, however, use additional firewall rules to protect your data if you connect the camera system to the internet. Another good thing is that the WiFi cameras have no effect on your internet speed. The cameras merely use the WiFi route’s signal strength to transmit data from the cameras to the storage unit. We suggest the SANNACE Wireless CCTV Camera System for most applications. It may not be compatible with Alexa, but it’s the best-rated, and you won’t have to face any problems. (3) 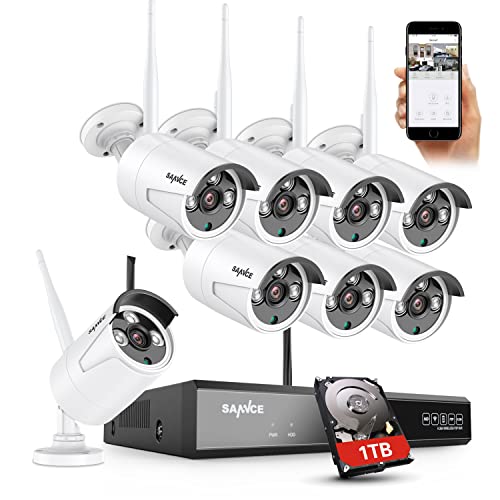 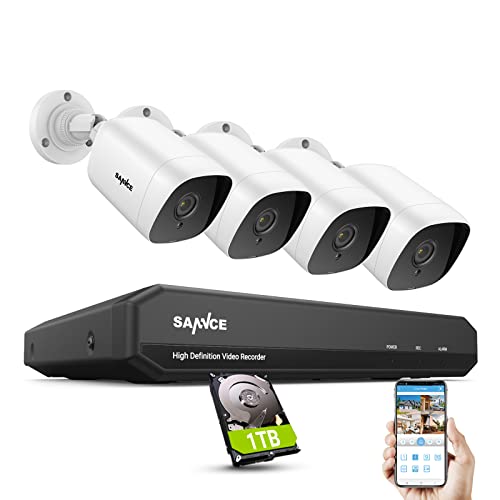 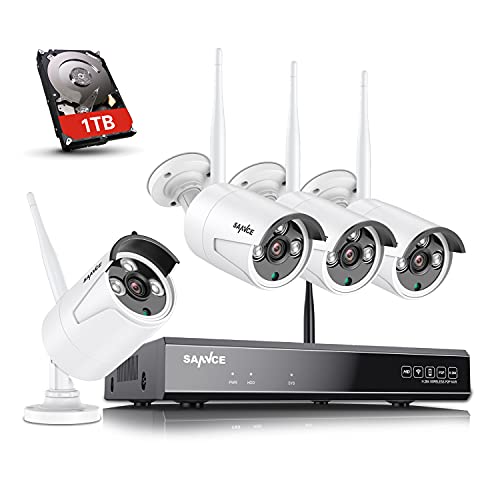