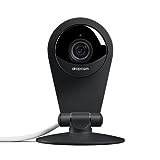 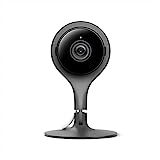 Nest and Dropcam are both currently owned by Google. This might make you wonder whether it’s meaningful to compare the two. However, as we discovered after extensive hands-on testing and evaluation in this Dropcam vs Nest review, there are significant differences between the two that might make you choose one over the other. For most people, however, we think the Nest Cam would be the better choice.

Although the camera transmits data wirelessly through WiFi, it needs to be plugged into a power socket. This is not necessarily a bad thing because security cameras that run on a battery don’t provide 24/7 footage and only turn on when they detect motion.

The Nest Cam was launched after Google’s purchase of Dropcam. Hence, the Google Nest Cam draws a lot of inspiration from the Dropcam pro. But as we’ll see in the next section, it’s not quite the same.

The Nest Cam security camera has high-quality 1080p HD camera footage that can be viewed from any location. The camera is also able to detect motion in the footage, which allows it to save a snapshot history of all the relevant events for up to 3 hours. You also get alerted via notifications on your phone when the camera detects motion. Like the Dropcam Pro, the Nest Cam also transmits data wirelessly through WiFi but needs to be connected to a power socket.

We will go through the features of both cameras in the sections to follow.

Although both of these cameras have 3-megapixel cameras, the Nest Cam offers a higher resolution of 1080p.

Cameras with a larger field of view have special lenses that allow light from a wider range of angles to enter the camera sensor. This does not do anything to increase the resolution of the camera. Instead, the lens is able to fill more area into the same camera sensor.

This is equivalent to placing a camera at a distance from the subject in order to capture more of the surroundings. The analogy goes beyond this. Since the lens as a wide-angle camera stuffs more area into the lens, the resolution of the objects in the center decreases; similar to when you move a camera away from a subject, you get a lower resolution picture of the subject.

Large fields of view are good for an outdoor camera that have to cover a lot of areas. However, indoor cameras can cover an entire room if they are placed in a corner, even if they have a lower field of view.

Both the Nest Cam and the Dropcam have a 130-degree field of view. This is more than adequate for an indoor camera, and both cameras can cover most of the room without having to be placed in a corner. However, the Nest Cam has smaller lens distortions which makes it slightly more favorable.

Both of these cameras have a 130-degree field of view which is more than adequate for indoor surveillance.

Both the Nest Cam and the Dropcam Pro offer cloud-based storage, which allows you to view recorded footage any time you like. Both of these cameras store footage of events for up to three hours in the cloud, even if you don’t subscribe to the premium packages.

Both of these cameras have different cloud storage packages but the Dropcam Pto stores 24/7 footage for 30 days which gives the Dropcam Pro an easy win in this category.

Cameras are able to see in the dark using infrared night vision. When it gets dark, security cameras turn on infrared bulbs that produce light that is invisible to humans but visible to cameras. This way, security cameras can see even in low light without lighting up the room.

Although both of these cameras have quite similar night vision capabilities, the Nest Cam’s infrared cut filter gives it a clear edge.

Both of these cameras are incredibly easy to set up, but with Nest, you have the option to mount it anywhere with a strong magnetic base.

Both of the cameras discussed can detect motion in the range of the camera. However, if you only want the camera to detect motion in certain areas, you can do so by using activity zones. Activity zones are areas outside of which no motion is registered. For example, if you place the camera in a way that it can also see outside a window, you can select only the inside of the room as the activity zone. This way, you won’t receive a notification every time the trees outside your window move, and you won’t have to go through hours of irrelevant footage of moving leaves when you want to find an event.

The Google Nest Cam allows you to create activity zones, whereas this feature is not available in the Dropcam.

If you subscribe to the Nest Aware or the Nest Aware Plus plan, you get some amazing features with the Nest Cam grouped under the term “intelligent alerts”. The camera can recognize familiar faces. It sends you a notification with the identity of the person when a familiar face is detected in the range of the camera. The camera can also detect and analyze sounds such as people speaking, dogs barking, glass breaking, and smoke alarm sounds. It sends you a notification for anything it detects.

The Google Nest Cam has a built-in mic and a speaker, which allows you to listen to live footage and communicate with anyone in the range of the camera. With Nest, you can communicate directly with your dog as if you were there.

The Nest Cam and the Dropcam Pro have featured quite similar to each other since the Next Cam was made based on the blueprints of the Dropcam Pro. Google aims to merge the two companies into Nest Labs, and hence most of the newer smart features are only available to the Nest Cam. However, if you don’t care for any of the advanced features, the Dropcam Pro may be better than the Nest Cam since it doesn’t get hot. But you will still have to sacrifice a lot of video quality if you choose the Dropcam Pro over the Nest Cam.

John Fox has been working as a security consultant for over 20 years. During his time in the industry, he’s learned about what it takes to ensure your home and family are always safe. With Safe Now, he’s tried to take those two decades of experience and share it with others. His goal now is to help others figure out how to make the right choices for their businesses and families.